A colleague gave me this analogy on why he votes, ”Its kind of like a man in relationship with a lady well knowing that the lady doesn’t like him. Whereas the man continues with the relationship , the reality that he is not the lady ‘s choice haunts him.” So in essence some people vote because they think it’s their duty and don’t want to be haunted by apathy. Right now NUP is in self denial,they believe that they won the election and have informed the supreme court that they will file a petition .

NUP’s party head was in the mud,his supporters shot at and some killed. He had to sleep in a vehicle with his team has had a bad time with security forces, this in essence had won him the sympathy vote so it was hoped that he would get a good number of votes. Kyagulanyi to his credit managed to do a cabinet reshuffle without stepping in state house because over fifteen ministers including the vice president lost their Parliamentary seats. So after the election it is natural for the development partners to meet up with the candidates and they have met with the NUP principal

After the elections, Kyagulanyi sought out a meeting with the British High Commission. One may wonder,why are the west seemingly recognising the winner of the disputed elections, the answer is simple, they’re not siding with any one but will rather side with peace and stability and Mr Tibuhaburwa can ensure that. The reason why perhaps the west were not with Besigye is when he introduced the Odius Debt Doctrine; this supposes that any debt gotten by an illegitimate government is not recognized meaning that Besigye was saying that should he have won the election, the previous debts were not going to be paid by the renewed Uganda. This didn’t make sense to the ambassadors who are here to represent their country’s interests and in a meeting at the Irish ambassador’s residence in kololo,they told him off. Similarly for those who have hope in the west understand one thing, the west puts stability over anything be it rigging or anything of that sort. First of all unless Kyagulanyi believes in magic,there are little chances of success with the election petition. The NUP MPs are going to swear in and join the eating class and also waste the taxpayers money in buying the lavish SUVs so its safe to say that Ugandans are on their own. 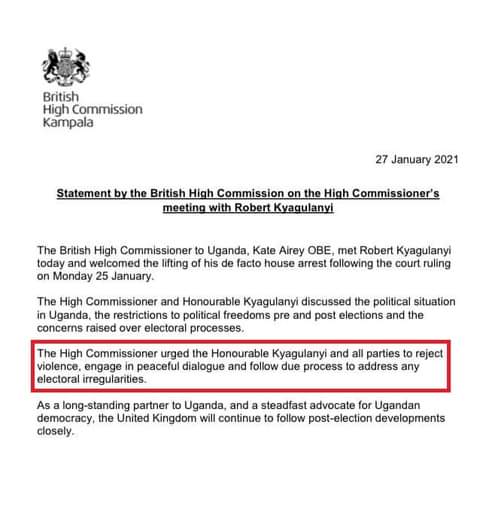